How did Kardzhali receive its name? 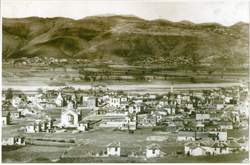 There are numerous myths and stories about Kirdzha Ali – an ordinary person, a commander and a saint, whose name the town of Kardzhali has received. Old people state that the native town of Kirdzha Ali is Buhara or Alanya which is a port in Konya region. In the Almanac of the Odrin Vilayet, in 1310 by Hidjra (year 1892) a legend was translated and according to this legend when The Turks аttacked the Rhodope Mountains during the reign of Sultan Murad I ( 1360-1389 ) the commander of the army was Kirdzha Ali. He was killed during one of the battles and the new town received his name. It is not easy to give a name to a new town, nor is it to give any other name.

Without doubt Kardzha Ali must have been a great person, who was far above the level of the people he lived with, a person who was far more competent, with great authority, ostensible, loved and esteemed as well. That was the reason why after his death people decided to call the town by his name. And this has eternalized Kirdzha Ali, no matter what kind of person he was. There still lies the question whether the town starts existing after Kirdzha Ali`s death or it existed even before that event and he just left his name to the town. However, we observe that it is more important to know how the town came into being. Let us see how legends present Kardzha Ali:

In one of Buhara`s clerical schools, which was an old scientific and arts center in Middle Asia, the former Uzbek USSR, there studied а certain Ali. He was remarkable for his great memory and was also loved by his classmates as well as by the imam who was his teacher. When Ali grew up, he became naughtier and became so fond of hunting that he did not come home all day long. Many times the imam advised him not wander in the woods and instead of this he advised him to study his clerical duties. Ali promised to do so, but once the lessons were over he took his gun again and went straight hunting.

The innumerable pieces of advice that the imam gave him did not work and so he decided to exercise his influence on Ali in some other way. The imam was a great wizard. He traced Ali as he once went hunting. While Ali was trying to aim carefully at a rabbit, the imam kept a close watch on him while hiding behind the tree. Ali killed the rabbit, but he was very surprised to see his imam lying killed instead of the rabbit. Terrified, Ali ran straight to school. However, the moment he entered the yard he saw his teacher washing quite calmly at the fountain. Ali took a deep breath and thought that this vision was a result of the fear he feels for his teacher, because of the frequent remarks of the imam. The next day when they started classes, the imam fixed his eyes upon Ali and asked:


To this, whether a legend or a real event, we shall add the note about Kirdzhi Ali which was written in the Almanac of the Odrin Valiyet dating back to year 1892, where on page 316 we read: " Although there does not exist another information about the conquest of the town of Kardzhali, according to Turkish chronicles this is thought to have happened during the reign of Murad I. After Gyumyurdzhina`s fall, next came Rhodope villages` turn. Another fact states that one of Murad`s commanders by the name of Kirdzhi Ali had fought on these territories. Here most of the villages had been destroyed by fire, Kirdzhi Ali rebuilt them and named one of these villages after his name. That is how the small town of Kirdzhi Ali has been founded in the Eastern Rhodopes ".